In our JC we discuss articles within the broad area of evolutionary genetics, including but not limited to population genomics. Occasionally we also have our journal club at the Gamla Orangeriet, in the Botanical Garden. Below you can find the papers we will be reading and discussing. 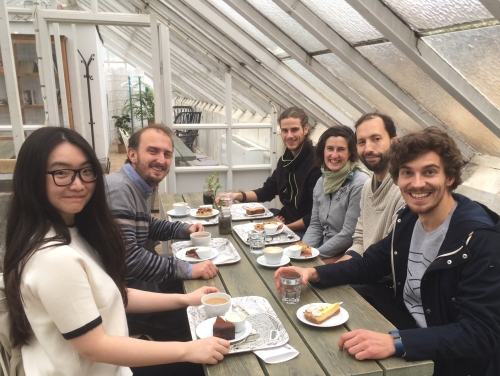 This week we will discuss a recent paper on the “social supergene” governing social organization in fire ants:

January 24th: The long and short of the Turnera S-locus

This week we will discuss a recent paper identifying the distyly S-locus in Turnera:

This week we will discuss a recent review highlighting the strength and limitations of different genomic approaches to identify sex-linked regions, as well as covering theory on the evolutionary causes of sex-chromosome turnover.

This Friday we will discuss a recent paper on the identification and evolutionary genetics of an supergene that governs social organization in Formica ants.

This Wednesday at noon we have a joint Evolution JC with Zoology in D451. We will discuss Darolti et al. 2019. Extreme heterogeneity in sex chromosome differentiation and dosage compensation in livebearers. PNAS 116: 19031-19036 (https://www.pnas.org/content/116/38/19031). Presenter: Juanita Gutiérrez Valencia

May 24th: Analysis of an extensive ancient genome time series

This Friday at 1 pm in room N340 we will discuss the following paper:

William will lead the discussion of this paper:

See also this related preprint by Aline Muyle and colleagues.

We will discuss ch 7 in Matthew Hahn’s Molecular population genetics in room N340.

January 18th: Evolution of male gamete number in a selfer

Jörg will present a preprint by Tsuchimatsu and colleagues at 1 pm in room N340:

Jörg will present a new paper in Science by Cai et al, entitled “Plants send small RNAs in extracellular vesicles to fungal pathogen to silence virulence genes”. We will meet at DEEP in N340 at 14:30.

Ben will present a review paper on mating system variation among populations, across a broad range of plant species.

We will meet in room N391 at DEEP – everyone brings two recent papers that would be interesting to discuss. Note, at 1 pm!

Verena will present this study of the rate of gene transfer to the Drosophila Y chromosome. We meet at 14:30 in N340 at DEEP.

Jörg will present this bioRxiv preprint on the evolutionary decline in self-compatible plants. We meet at 14:30 in N340 at DEEP.

March 16th: Non-bifurcating history of species from the Arabidopsis genus

We will discuss this paper by Novikova and colleagues on the complex history of species from the genus Arabidopsis. Presenter: Robert. Room: TBA, but at DEEP, 14:30.

We will discuss an example of machine learning for detecting different types of sweeps.

Note! We will meet on Thursday March 8th, at 2 pm at SciLifeLab (room Becquerel, gamma 5).

Ben will present a recent review in Trends in Genetics on supervised machine learning for population genetics by Schrider and Kern. We meet at 14:30 in room N340, at DEEP.

February 9th: Loss of self-incompatibility in A. thaliana

Tanja will present a nice example of a study demonstrating the genetic basis of loss of SI in A. thaliana: Tsuchimatsu 2010. Evolution of self-compatibility in Arabidopsis by a mutation in the male specificity gene. Nature 464: 1342-1346. We meet at 14:30 in room N491, at DEEP.

Marco will present a paper by González-Martinez et al. 2017 on the impact of selection in different parts of the range of an outcrossing plant. Also see this related paper (with some familiar co-authors!). We meet at 3:00 pm, DEEP room N340.

Xuyue will present a recent paper by Avalos et al. (2017) in Nature Communications on a soft selective sweep during rapid evolution of gentle behaviour in an Africanized honeybee. We meet at 2:30 pm, DEEP room N340.

Everyone brings 2-3 papers that they think would be interesting to discuss – please be prepared to tell the others why you think the papers you chose are interesting. We will meet at 2.30 pm, DEEP room N340. There may be cake…

Robert will present this paper by Bradley et al. (2017) on the role of regulatory small RNAs for flower colour pattern in a snapdragon hybrid zone.

November 24th: Origin and evolution of a young Y chromosome in Asparagus

Tanja will present this paper by Harkess et al. (2017) on the origin and evolution of a young Y chromosome in Asparagus officinalis.

Ben will present this paper on the unusually structured S-locus of Leavenworthia:

Marco will present a paper by Baldwin and Schoen on genetic variation for pseudo-self-compatibility in Leavenworthia alabamica. Note on Wednesday at DEEP, N340, 14.00.

Everyone picks 2 recent papers of interest and prepares to tell the others why they chose them/what they found interesting. We meet at DEEP (room N340) at 1 pm. Cake at Gamla Orangeriet afterwards!

Jörg will lead the discussion of this recent paper by Durvasula and colleagues: Durvasula et al. 2017. African genomes illuminate the early history and transition to selfing in Arabidopsis thaliana. PNAS 114: 5214-5218

We will discuss a recent paper on the genetic architecture of the Primula S-locus supergene: Li et al. 2016. Nature Plants.

We will discuss an MBE paper from 2013 by Arunkumar et al. on the impact of selection on genes expressed in pollen in Capsella grandiflora.

We will discuss a recent paper in PNAS by Henn et al. on the impact of serial bottlenecks on genetic load in human populations.

February 24th: The effect of an extreme and prolonged bottleneck on patterns of deleterious variation

We will discuss a recent paper in Genetics where Pedersen et al. combine analyses of population genomic data with simulations, to characterise the effects of a long and severe bottleneck on deleterious variation and evaluate different measures of genetic load. Location: N491, DEEP, Stockholm University.

We will discuss a recent paper in eLife entitled “Population scale mapping of transposable element diversity reveals links to gene regulation and epigenomic variation” by Stuart et all, on Friday at 2.30 pm at Gamla orangeriet.

We will discuss a recent paper in MBE entitled “Genome sequencing reveals the origin of the allotetraploid Arabidopsis suecica” by Novikova et al., on Thursday at 1 pm at SciLifeLab (Hertz, Gamma 6).

Everyone picks 2-3 recent papers of interest and summarizes them. This time we will meet at 1 pm at Gamla Orangeriet.

Engy will present this review paper on ancient DNA from sediments and their impact on reconstruction of past biodiversity.

Birks et al. 2016. How have studies of ancient DNA from sediments contributed to the reconstruction of Quaternary floras? New Phytologist 209: 499-506

June 2nd: Regions of open chromatin are enriched for variants with effects on gene expression and phenotypic trait variation in maize

Jörg will present this review paper on the limits and prospects for detecting balancing selection in genomes. Note that we will start at 3 pm!

May 20th: Recent selection for self-compatibility in Leavenworthia

This week we will read a recent paper on population genetic patterns surrounding the S-locus in a self-compabtible population of Leavenworthia alabamica:

May 13th: Genomic distribution of conserved noncoding elements and association with gene expression in mammals

Note: We will meet at the Gamla Orangeriet this week.

Everyone picks 3-5 recent papers of interest and summarizes them. Here is the list of papers and links that we discussed.

Note: We will meet at the Gamla Orangeriet this week.

February 17th:  The complications of inferring relaxed purifying selection in non equilibrium situations. NB change of time: Friday at 10.30 am!

Tanja will present this short review paper: Brandvain and  Wright. 2016. The limits of natural selection in a nonequilibrium world. Trends in Genetics, in press.

November 20th: Evolution and silencing of repeats in Arabidopsis and relatives

We will read and discuss this paper on the age distribution and silencing of repeats in the Arabidopsis thaliana genome: Maumus F, Quesneville H. 2014. Ancestral repeats have shaped epigenome and genome composition for millions of years in Arabidopsis thaliana. Nat Commun 5:4104.

This paper is also relevant for those going to Brandon Gaut’s seminar at EBC in Uppsala on Tuesday November 17th at 14.00 (Lindahlsalen).

November 6th: Evolution of dominance at the Brassicaceae self-incompatibility locus

NOTE! On THURSDAY, at SciLifeLab, gamma 6, before lunch.

NB! On THURSDAY, at SciLifeLab, gamma 6.

We will discuss this paper on the impact of linked selection on analyses based on extensions of the classic McDonald-Kreitman test.

We will discuss this paper which deals with genetic and epigenetic mechanisms for gene expression changes in polyploids:

For this session, we will discuss a recent paper on patterns of molecular evolution and efficacy of natural selection in outcrossing and selfing snails: Burgarella et al. 2015. Molecular Evolution of Freshwater Snails with Contrasting Mating Systems. Molecular Biology and Evolution, 32:2403–2416 Presenter: Ben